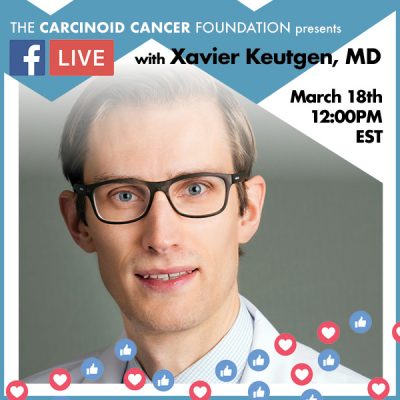 The Carcinoid Cancer Foundation recently presented a Live Q&A session with Dr. Xavier Keutgen, discussing surgery for people living with neuroendocrine tumors (NETs), the importance of finding the primary tumor, and how surgery fits into a comprehensive treatment plan.

Dr. Keutgen is the Director of the University of Chicago Neuroendocrine Tumor Center and has particular expertise in treating neuroendocrine, thyroid, parathyroid and adrenal tumors as a surgical oncologist.

Q: When is it best to undergo cytoreductive (reducing the bulk of tumors) surgery? How do I know if I am a good candidate?

A: If you have a small bowel neuroendocrine tumor that has spread to your liver, your primary tumor is out, you’re on  a monthly somatostatin analog injection, and everything has stayed stable — first of all, that’s great. And that’s the typical scenario for these Neuroendocrine tumors because they are normally slow growing.

If this is the case, you have what’s called a favorable biology. At this point, I would argue that you should see a surgical oncologist that’s experienced in removing these tumors out of your liver. Why? Because if they are resectable, we should resect them, so that we can reset the time clock. And by “resetting the time clock,” I mean, we basically put you back to where you were many years ago when the tumor had not grown to a significant size in your liver. As many studies have shown, this will increase your time for survival.

Q: After the operation, what’s left over in the liver?

A: Probably nothing, if we rescan you. But again, as I said before,  there will probably be tiny microscopic cells that will grow over time. But it could take five, six, seven, eight,  ten years until anything grows back in your liver.

At that point, we could put you on further therapies.

Q: So what does that mean for treatment?

A: We’re not talking about a sprint. We don’t want to use all the therapies up front. We want to make you live as long as you can, and use therapy sequentially, which means using the right therapies at the right time. It’s really a marathon.

If you are a resectable candidate and we take the tumor out of your liver, we can watch for future growth. The average for small  bowel neuroendocrine tumors to start growing again in the liver after they have been resected, is about five years.

So, under normal circumstances, we have the ability to give you a significant amount of time after surgery where you will not have to undergo any other therapies — no somatostatin analogs, no PRRT, nothing.

Q: With multiple recurrences, how many times can one undergo liver wedge resection? And, what is the difference between slow-growing and fast-growing tumors?

A: Essentially, you can undergo wedge resection as many times as you need to. I’ve operated  on patients for the fourth or fifth time. Every time you reoperate, there is scar tissue, so it takes a little longer for surgeons to get to the tumors. But, there’s no limitation on how many times you could do it.

The question becomes, when does it make sense to do it again? And that’s more appropriate to your next question, what is slow growing and what is fast growing?

When tumors are slow growing, it definitely makes sense to reoperate. When they are fast growing, showing growth within three months to a year or your tumor has grown significantly after surgery, then it’s probably not the best time to reoperate.

We want to make sure that you get at least a few years of benefit after an operation, before the tumor starts growing again.

Q: What do you recommend for patients after surgery?

A: Many surgeons that are not as familiar with neuroendocrine tumors, but can do these relatively simple, straightforward bowel surgeries on their own, forget to say that it’s very important to continue to surveil. Even if everything is taken out, you still want to make sure that you get a scan at least every six months for the first year and at least once a year for a minimum of five years.

These tumors can come back, and I can’t tell you how many times I’ve seen patients that told me, “Well, my surgeon told me I was cured.” And, then three years later, they have many lesions in the liver.

So, I don’t mean to scare people, but I want to make sure that everyone gets appropriate follow-up. So if it’s not your surgeon, it should be your medical oncologist that follows you up on a regular basis.