Do you know someone who is a passionate advocate for patients with neuroendocrine tumors (NETs)? Novartis Oncology and The NET Alliance are searching for an outstanding NET patient advocate to recognize and honor with the 6th Annual Warner Advocacy Award.

The 2015 Warner Advocacy Award will be given to the individual who best embodies the spirit, passion, and dedication of the late Monica Warner, a driving force behind the Carcinoid Cancer Foundation for two decades and an extraordinary advocate for carcinoid and neuroendocrine tumor patients. Although she passed away in 2009, the spirit of her passion and hard work lives on.

Nominations are now being accepted and all submissions are due by 5 pm, Eastern Standard Time, on Thursday, August 20, 2015.

This year’s award process is different from previous years:

The recipient will receive an individual award of recognition (non-monetary) and a donation of $10,000 from Novartis Oncology to an approved, patient-focused 501(c)(3) charitable organization suggested by the awardee.

Nominees may be patients, caregivers or advocates who work in the United States. While Novartis recognizes the contributions and dedication of health care professionals, this award is not intended to be given to a healthcare professional. 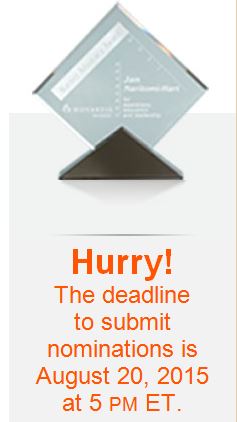 Nominations will be reviewed for the following criteria: