Patients with metastatic carcinoid syndrome will have the opportunity to participate in a new Phase 3 clinical trial of Lexicon Pharmaceutical’s telotristat etiprate (LX1032), an oral drug candidate designed to treat carcinoid syndrome by reducing serotonin production.  The clinical trial, also known as TELESTAR (Telotristat Etiprate for Somatostatin Analogue Refractory Carcinoid Syndrome), is now recruiting patients in the United States. The study is planned to open in 10 additional countries early next year.

Telotristat etiprate has Fast Track status and Orphan Drug Designation from the U.S. Food and Drug Administration, and Orphan Drug Designation from the European Medicines Agency. The Fast Track program in the United States is designed to facilitate the development and expedite the review of new drugs intended to treat serious diseases, and which demonstrate the potential to address unmet needs.  The purpose of the program is to get important new drugs to the patient earlier.  Fast Track benefits include eligibility for an early review process that may significantly shorten FDA approval times.  Carcinoid syndrome is the first therapeutic indication for which Lexicon has obtained Fast Track status. In Europe, Orphan Drug designation promotes the development of drugs intended for the prevention or treatment of life-threatening or chronically debilitating conditions.

The primary purpose of the Phase 3 study is to confirm that at least 1 or more doses of telotristat etiprate compared to a placebo is effective in reducing the number of daily bowel movements averaged over the 12-week period of the trial in patients who are no longer responding well to current somatostatin analog (SSA) therapy, including octreotide and lanreotide therapy.  Two dose levels of telotristat etiprate, 250 mg and 500 mg given three times a day, will be tested along with the placebo.  The study will include approximately 105 patients with refractory (more than 4 bowel movements per day on average while on current SSA treatment) carcinoid syndrome assigned equally among 3 treatment groups.  After the 12-week treatment period, patients will enter a 36 week open-label extension period where all patients will receive telotristat etiprate 500 mg, three times daily.

Carcinoid syndrome is a chronic condition caused by metastatic neuroendocrine tumors that usually originate from the intestinal tract.  This condition is caused by release into the circulation of excessive amounts of serotonin and other hormonal substances from some carcinoid tumors. Symptoms may include flushing of the face, diarrhea, bronchial spasms (wheezing), rapid pulse, and sudden blood pressure changes (usually a fall) along with other symptoms of heart failure. Carcinoid syndrome is often mistaken for common diseases including irritable bowel syndrome,  rosacea,  asthma, or menopause.

Telotristat etiprate was discovered and developed at Lexicon to reduce serotonin production by inhibiting tryptophan hydroxylase (TPH), a key enzyme in the synthesis of serotonin.  Serotonin’s breakdown product, 5-HIAA, is a biomarker used in the diagnosis of the condition. Telotristat etiprate was specifically designed to be absorbed into the blood stream without crossing the blood brain barrier so as not affect brain serotonin levels. Excess serotonin production by tumor cells has been associated with severe diarrhea, gastrointestinal pain and discomfort, and heart valve damage.  Telotristat etiprate is a member of a new class of oral drugs invented by Lexicon, the serotonin synthesis inhibitors, which are being developed in a spectrum of gastrointestinal indications.

In the United States, the Phase 3 clinical trial of telotristat etiprate will be evaluated at centers in the following states: 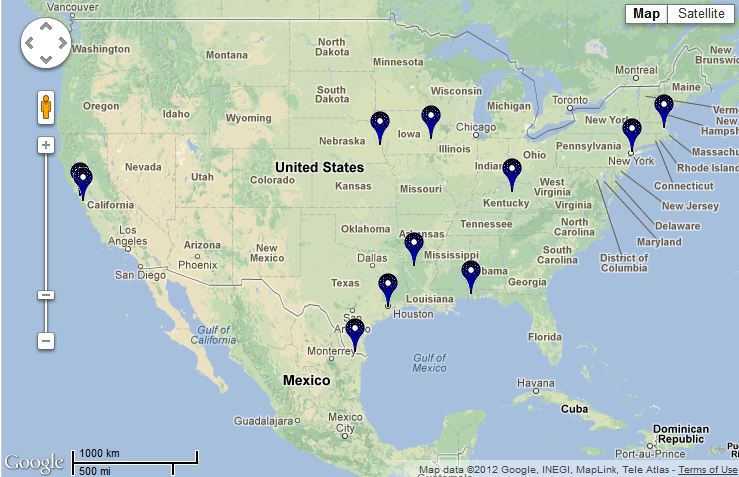 Internationally, the trial will also be conducted in the following countries: