For $1.6 million (1 million pounds) an oncolytic virus that has the potential to cure neuroendocrine cancer can be named for the donor.  At Uppsala University in Sweden researchers are ready to start a clinical trial for up to 20 NET (neuroendocrine tumor) cancer patients but need funding to make the trial possible.  Oncolytic viruses have great potential in cancer research as they cause cancer cells to be destroyed.

Magnus Essand, professor of gene therapy at Uppsala, has had an oncolytic virus in a freezer for the past two years that was used effectively in mice but has not yet been used in trials for humans as they are too expensive for academic centers.  Additionally, he cannot claim a patent for this oncolytic virus because of his early publication about his research and therefore it is less appealing to biotech companies. Funding would enable Uppsala to launch the world’s first human trial of an engineered virus that targets neuroendocrine cancer.

The idea to name the virus after a person is thanks to British author Alexander Masters, whose dear friend has pancreatic neuroendocrine tumor cancer, the same type of cancer that took the life of Steve Jobs of Apple nearly a year ago.  Traveling to universities in the United States, Mr. Masters was struck by how many buildings, rooms, and more are named for benefactors.  Mr. Masters saw the need in neuroendocrine research for a philanthropic individual to give money who wants his or her name, or the name of a loved one, attached to that research. Read Alexander Masters’ article that appeared in The Telegraph on August 31, 2012, A Virus that Kills Cancer: The Cure That’s Waiting in the Cold, here: http://www.telegraph.co.uk/science/9508895/A-virus-that-kills-cancer-the-cure-thats-waiting-in-the-coldc.html. 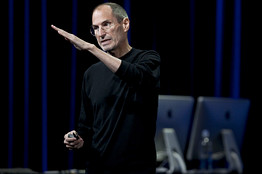 Steve Jobs died of a pancreatic neuroendocrine tumor at the age of 56.

In an article by Andrew Jack in London’s Financial Times* yesterday about the researchers’ offer to name the cancer drug, Professor Jack Bell, a leading Canadian cancer researcher was quoted when he described oncolytic viruses as “a very promising and safe field.”  He said the naming of a drug was a “clever idea” as it is extremely challenging to obtain funding for research.

*Please note, the Financial Times is by subscription but interested individuals can have limited access for free and after registering, can access the August 31, 2012 article, “Scientists offer to name cancer drug for £1m”