“Treatment for high grade neuroendocrine neoplasms (abnormal tissue growth) is moving the way that the treatment for triple negative breast cancer is moving — toward the realization that there are a basket of subtypes and that each can be potentially treated differently,” according to Aman Chauhan, MD, medical oncologist, Director of NET Theranostics, Markey Cancer Center (NCI Designated Cancer Center), University of Kentucky. Insights gained through clinical trials will change how these cancers are diagnosed and treated.

“Pathology is key,” said Dr. Chauhan. “In 2010, the World Health Organization (WHO) acknowledged three grades of NETs, based on the Ki-67 index, which assesses how rapidly cells are dividing. The faster they divide, the more aggressive the cancer. In the last decade, though, we have learned that not all Grade 3 tumors behave the same. High grade neuroendocrine neoplasms in two patients can behave differently based on morphology, i.e. how they look under the microscope. Well-differentiated Grade 3 neoplasms fare considerably well as compared to poorly differentiated neuroendocrine carcinomas  (NECs).”

“For the moment,” said Dr. Chauhan, “these cancers are still being treated with platinum-based chemotherapy due to lack of data based on a large clinical trial. However, the scientific community has realized the need for optimal treatments for both well- and poorly differentiated high grade neuroendocrine neoplasms. Currently, it looks like immunotherapy might make inroads in the management of poorly differentiated carcinomas, especially in patients with a  heavy burden of genetic changes.” 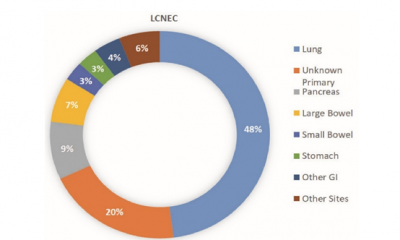 Distribution of LCNEC based on site of origin. This graphic shows the distribution of large cell neuroendocrine primary tumor locations.

Dr. Chauhan continued, “In April 2019, SWOG DART trial results for neuroendocrine neoplasms were revealed at the annual American Association for Cancer Research (AACR) meeting.” SWOG is the cancer clinical trials group that is part of the National Cancer Institute’s National Clinical Trials Network (NCTN).  DART, short for Dual Anti-CTLA-4 and Anti-PD-1 blockade in Rare Tumors, is a federally funded immunotherapy trial devoted to rare cancers. “This is a combination ipilimumab plus nivolumab clinical trial for rare tumors and has numerous baskets,” said Dr. Chauhan. “The neuroendocrine neoplasm basket was among the earliest to finish accrual and the results look promising for high grade neuroendocrine neoplasms. These early results will, however, need to be confirmed in a large randomized study. Similarly, there has been a growing debate regarding optimal management of well-differentiated high grade NETs. Chemotherapy regimens like capecitabine and temozolomide, or CAPTEM, are being evaluated against platinum-containing regimens.”

Going forward, said Dr. Chauhan, “the more we find out about the subtypes of NETs and NECs, the more effectively we can target these cancers.” Dr. Chauhan is doing just this. “We recently got a grant to study precision (personalized) medicine-based frontline treatment of high-grade NECs. We believe that molecular profiling of these high grade poorly differentiated carcinomas can help us put them in two broad cohorts — ‘small cell like carcinomas’ and ‘non-small cell like carcinomas’ — and we can then institute appropriate treatment.” Dr. Chauhan expects to have the trial up and running in the next few months.

NETs are still considered rare cancers, but both the incidence (rate of new, or newly diagnosed cases) and the prevalence (proportion of cases in the population at a given time) are rising. In response, there is a concerted effort within the discipline to cultivate physicians’ understanding of them. Dr. Chauhan is part of the next generation of NET experts who are being mentored by those who have come before them. When he arrived at the University of Kentucky, Dr. Chauhan was mentored by Lowell Anthony, MD, FACP, Chief of Medical Oncology at the Markey Cancer Center. “Dr. Anthony feels that while diagnoses and treatments (of NETs) are improving, high-grade NETs have been a neglected area,” says Dr. Chauhan. “So we need to train young people to focus on this. Fifty percent of my practice focuses on high-grade neuroendocrine neoplasms.”

Dr. Chauhan also was recently selected to join NET Connect, an organization that brings NET experts together and includes strategic support from a steering committee of established leaders in the field. Under the auspices of NET Connect, these physicians collaborate in scientific activities and develop educational programs for medical oncologists, endocrinologists and gastroenterologists to further scientific developments and create a pathway for them to cross over into clinical practice.

In other developments, Dr. Chauhan is also happy to see pharmaceutical companies embarking on studies to evaluate new agents and targets. “We haven’t seen much progress in the last 10-15 years as compared to other areas of oncology so it’s good to see some movement now. The last 3 years have been exceptional with a slew of FDA approvals for NET related therapies. More importantly, many new trials are now in the pipeline. The future seems promising.” Some select trials include: