It is with great excitement that we share the announcement of the start of the AdVince clinical trial  for neuroendocrine cancer patients at Uppsala University in Sweden – the oncolytic virus is on its way to the first patient in the trial!! 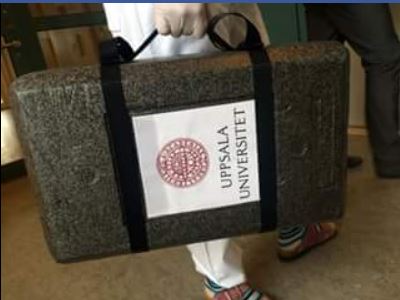 From freezer to patient, the AdVince oncolytic virus is on its way!

What began as an idea by Alexander Masters in 2012 about how to obtain funding for a clinical trial for rare cancer patients became a reality thanks to nearly 2,000 individuals, the iCancer campaign, and an extremely generous gift of $2 million from Vince Hamilton.  Mr. Masters’ idea was to name the oncolytic virus after the donor who funded the trial. And so the AdVince trial was born.

Magnus Essand, professor of gene therapy at Uppsala, had the oncolytic virus in a freezer for 2 years before Alexander Masters learned of his research.  The virus was used effectively in mice but hadn’t yet been used in trials for humans.  Professor Essand could not claim a patent for this oncolytic virus because of his early publications about his research.  Funding of this virus would enable Uppsala to launch the world’s first human trial of an engineered virus that targets neuroendocrine cancer.

What is an oncolytic virus? An oncolytic virus, sometimes called a cancer-eating virus, is a genetically modified virus that tracks down cancer cells in the human body, infects and kills them. In January of 2016, the Medical Product Agency (the regulatory body in Sweden) and the Regional Ethics Committee approved “the initiation of a phase I/IIa clinical trial with AdVince for patients with neuroendocrine cancer.”

In addition to the gift from Mr. Hamilton, who sadly passed away in March 2014, the iCancer campaign – the championing of the cause by Alexander Masters, Dominic Nutt and Liz Scarff in Europe and Catherine Cooling Davis in the United States – has made possible the AdVince clinical trial.  Financial Times described this campaign as the most successful crowdfunded medical trial ever. The iCancer campaign team noted that, “The campaign went global and viral and trended on Twitter – as we hoped and intended.”

The iCancer Campaign team will be sharing updates over the coming weeks, including a film of the first patient. Follow their updates on Facebook, https://www.facebook.com/icancervirus/?fref=ts, and Twitter @iCancerVirus.

Should Rich Patients Be Able to Buy Their Way Onto Medical Trials? by Dominic Nutt, https://www.linkedin.com/pulse/should-rich-patients-able-buy-way-onto-medical-trials-dominic-nutt

A Possible Cure for Neurendocrine Cancer – It Can Be Named for You or a Loved One, CCF blog, https://www.carcinoid.org/2012/09/01/a-possible-cure-for-neuroendocrine-cancer-it-can-be-named-for-you-or-a-loved-one/