The combination of a lengthy road-bike ride, a recovery drink mix, and dried figs from Trader Joe’s led to a health crisis for Steven Muller and a subsequent diagnosis of a neuroendocrine tumor (NET) in his small intestine. Neuroendocrine tumors, including carcinoid cancer, pancreatic neuroendocrine tumors, pheochromocytoma and multiple endocrine neoplasia (MEN) are rare diseases that affect at least 125,000 people in the United States. Steven is sharing his story today, February 29, 2016, Rare Disease Day, in hopes that others who have neuroendocrine tumors get a proper diagnosis, early on. 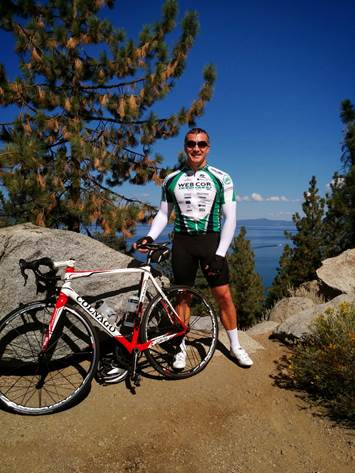 A seasoned and accomplished athlete, Steven didn’t anticipate how he would feel back in July of 2013 after cycling 60 miles on a very hot day and experiencing a 4,000 foot altitude gain during the ride. He stopped off at the home of Andreas Bibl, the man he describes as his Silicon Valley Mentor, who offered Steven a highly-concentrated drink and dried figs to help him recover from his state of dehydration. One of the figs bloated, got stuck in Steven’s intestines, and caused a small bowel obstruction. That led to an ER visit and an eventual colonoscopy during which doctors discovered the tumor that had been slowly growing for many years. Without that unique confluence of events –especially the Trader Joe’s fig getting stuck on the tumor and literally saving his life – Steven’s cancer would have continued to grow and spread.

At the time doctors diagnosed Steven, his tumor had already spread to 30 lymph nodes and nearby organs. Surgery was scheduled for August. Using da Vinci robotic technology, a minimally invasive procedure during which surgeons operate through a few small incisions, Steven had a right hemicolectomy, an appendectomy, and a right ileocolectomy.

“Early detection is critical,” says Steven, advising anyone who suspects a neuroendocrine tumor to “be relentless, go to reputable medical professionals, get all of the necessary tests, and take recommendations of actions as mandatory.”

As he was only 33 when diagnosed, Steven wouldn’t normally have had a colonoscopy. But when his small bowel obstruction resolved itself and the doctor suggested a colonoscopy, Steven scheduled it immediately. Following his diagnosis, he scheduled appointments with 3 different neuroendocrine tumor specialists, two in California and one in New York.

When people look at Steven they see a young, healthy, fit man. “Just because you look a certain way doesn’t mean you’re healthy,” says Steven. In addition to his NET diagnosis, he learned in 2014 that he had basal cell skin cancer on his face, near his sideburn. Moh’s surgery was used to remove the small growth, which he had thought was a mole and was discovered by a dermatologist who was checking out a mole on Steven’s back that was irritating when he exercised.

As the 36-year-old father of 3 young girls, ages 5, 3, and 9 months, Steven has reflected upon what cancer might mean in his life. He is vigilant in visiting doctors to ensure he is properly followed and he is very optimistic about his future. His diagnosis initially caused him great anxiety and high blood pressure. His doctor recommended cognitive behavioral therapy at Stanford University in California which helped Steven to feel better prepared to handle the stresses of living with a cancer diagnosis.

Steven and Jackie Muller and their 3 daughters.

Steven also worked longer hours to shift his focus and he believes that immersing himself in his work was helpful. One of the Heads of Business Development for Google Play App Developers in California, Steven made his way to Silicon Valley from the East Coast. He grew up in the northern suburbs of New Jersey, went to parochial school, became a state champion wrestler and pole vaulter, and was eventually nominated to the United States Naval Academy in Annapolis, Maryland.

After earning his Bachelor of Science in Economics from the Naval Academy, he was accepted into the highly competitive Naval Nuclear Submarine Officer program and received the equivalent of a Master of Engineering Management in conjunction with Nuclear Power training. He served as a Division Officer on board a Ballistic Nuclear Submarine (USS West Virginia, SSBN 736) and received a Top Secret Security clearance, during which time he managed a nuclear reactor plant, operated a periscope, and broke top secret codes while transiting hundreds of feet below the surface of the ocean. He chose this path following high school, says Steven, because “I wanted to serve my country and do it in a way that was fun and exciting.”

Realizing he didn’t want to make the Navy his long-term career, Steven then transitioned into banking and went to work on Wall Street in derivatives, first with Barclays Capital and then serving as Vice President of Financial Operations at Deutsche Bank.

When the financial crisis of 2007-2008 struck Steven chose to pursue a new path. He earned a Master of Business Administration (MBA) from Duke University in North Carolina and from there he moved to the West Coast. He began the next phase of his career at Google, first as Finance Manager, working on a strategic payment solution for Google Shopping and spearheading major strategic divestiture, and most recently with Google’s Strategic Account Management for Google Play. “Google is a company that appreciates innovative thinking,” says Steven. It is that culture that makes him thrive personally and professionally and has earned him awards for leadership and high levels of accomplishment.

Always attracted to that which is highly challenging and difficult has guided Steven from his youth on, whether it is in athletics, Armed Forces service, banking, or management. His ultimate career objective is to be a Chief Operating (or Business) Officer of a major organization that focuses on making the world a better place.

Steven has also dedicated himself to cycling, doing 100 mile rides each year, including an annual ride in the Best Buddies Challenge: Hearst Castle, raising funds for Best Buddies programs for inclusion for people with intellectual and developmental disabilities.

That’s where Steven’s mentor and friend, Andreas Bibl, inventor and entrepreneur, comes in. It was Andreas who encouraged and inspired Steven to become an avid cyclist in 2011 and pushed him to ride the Tunitas Creek route on July 13, 2013. And it was at Andreas’ house where they stopped to eat Trader Joe’s figs while drinking Cytomax. Andreas himself was diagnosed with cancer 6 months after Steven and they fought cancer together, riding the rigorous hills and roads of Silicon Valley. 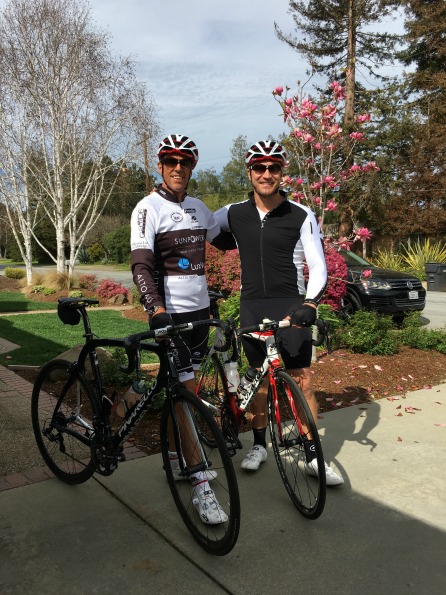 Interaction with family and friends led Steven on the path to acceptance of his cancer. It has been a demanding journey since he initially learned of his diagnosis – in fact his ears were ringing so loudly when the doctor said the words Stage IV cancer that he could not hear anything else at the time. But he has come to accept his journey as he has all of the other challenges in his life. With loving support from his wife, Jackie; the pride and joy he takes in his three daughters; mentorship from his Silicon Valley friend Andreas; and the wonderful team of people at Google, Steven continues to seek out and embrace new challenges and new opportunities, including a cycling event to raise funds and awareness about neuroendocrine cancer.