The Carcinoid Cancer Foundation in White Plains, New York has awarded a grant of more than $65,000.00 to Stanford University in California to expand access to its Gallium-68 (Ga-68) DOTA-TATE PET/CT program for carcinoid and neuroendocrine tumor (NET) patients with somatostatin receptor positive tumors.

Andrei Iagaru, MD, Associate Professor of Radiology and Co-Chief of the Division of Nuclear Medicine and Molecular Imaging at Stanford University Medical Center, is the Principal Investigator of the study. “We are extremely grateful to the Carcinoid Cancer Foundation for this very generous grant,” said Dr. Iagaru. “With these funds we will be able to offer additional patients with no insurance approval access to the study at no charge.”

Keith Warner, Chief Executive Officer of the Carcinoid Cancer Foundation, said support of the Stanford clinical study was made possible by “a private donor who contributed these funds with a request that they be directed to clinical research of Gallium-68 imaging and related studies on the West Coast. We believe this research can be of enormous benefit to the carcinoid/NET community, helping to improve quality of life and length of life for NET patients.”

Used in Europe for more than a decade, the Ga-68 labeled peptides (DOTA-TATE, DOTA-TOC, DOTA-NOC) PET/CT scan is also available in Asia, Australia, Latin America, and India. In the United States, it is only available in clinical studies at the present time. The Ga-68 labeled peptides PET/CT scan is a type of PET scan  based on similar technology to Octreoscan®. PET imaging using the Ga-68 labeled compound DOTA-TATE offers higher resolution and sensitivity than Octreoscan®, at a lower cost, and with improved convenience for patients. An important benefit of the Ga-68 DOTA-TATE scan is that it can be more effective at detecting smaller tumors and metastases because it binds very strongly to the SST2 somatostatin receptor of the neuroendocrine tumor cells. According to Dr. Iagaru, the Ga-68 DOTA-TATE scan is used to evaluate the extent of a patient’s disease and to monitor the effect of treatments. 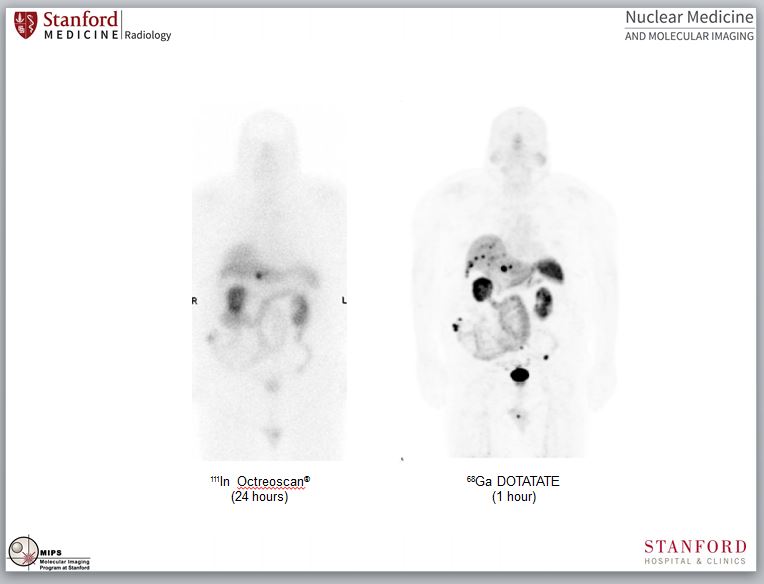 Because more than 50% of neuroendocrine tumor (NET) patients do not get a proper diagnosis until the disease has metastasized, “accurately staging and fully treating the disease at the earliest time possible will achieve the best outcome,” notes Dr. Iagaru. “Imaging is a critical element of NET workup.”

Stanford University and UCLA were the first medical facilities on the West Coast to offer the Ga-68 DOTA-TATE PET/CT study and 37 patients have participated at Stanford University since the study began enrolling participants in January 2014. Dr. Iagaru and his colleagues plan to enroll 200 patients during the 5-year period of this expanded access program (EAP).

According to the clinicaltrials.gov website, expanded access is “a process regulated by the Food and Drug Administration (FDA) that allows manufacturers to provide investigational new drugs to patients with serious diseases or conditions who cannot participate in a clinical trial.”

Preliminary results of the Stanford study have demonstrated that with new information from the scan physicians have changed the management of 60-70% of the patients participating in the EAP.

The EAP at Stanford also marks a collaborative effort with the Neuroendocrine Center at Vanderbilt University in Nashville, Tennessee. Vanderbilt was the first US facility to offer the Ga-68 DOTA-TATE scan in clinical trial and by sharing their protocol and results with Stanford, it enabled the physicians and researchers at Stanford to get approval for the EAP more quickly, which also saved money. The NET team at Vanderbilt was the first to report measured human dosimetry of the somatostatin analog, Ga-68 DOTA-TATE, in peer-reviewed literature. Radiation dosimetry is the calculation and assessment of the radiation dose received by the human body. Dr. Iagaru said that Stanford also plans to share anonymized data from the clinical study with the Clinical Trials Network at the Society of Nuclear Medicine and Molecular Imaging (SNMMI).

It is the goal of Dr. Iagaru and his colleagues engaged in the Ga-68 DOTA-TATE PET/CT EAP to improve the care of carcinoid/neuroendocrine tumor patients. They also plan to “accrue data for the U.S. Food and Drug Administration (FDA) that will demonstrate the safety, effectiveness and superiority of this scan over conventional Octreoscan® that will ultimately support the widespread adoption of this powerful and superior imaging technique throughout the US for patients with NET.”

Who is eligible for the clinical trial? Study participants include patients who have been diagnosed with a neuroendocrine tumor by biopsy and those whose physicians have a strong suspicion of a neuroendocrine tumor with previous imaging tests. Patients who are interested in participating in the study at Stanford University should contact Ms. Phuong Pham, ppham5@stanford.edu or Dr. Krithika Rupnarayan, 650-736-0959, krupnara@stanford.edu.