I am so thankful I can run.  Running has given me so much; health benefits, time to meditate, time to enjoy nature and meet so many fun and supportive friends.  I have always been an active person.  When I was younger I ran around playing in the neighborhood, joined the city track team and studied ballet for many years.  The feeling of freedom and sheer joy I get from running or dancing I have never experienced with any other activity.

I was diagnosed with Neuroendocrine Cancer in 1999.  I was 37 years old, married and had two very young boys.  This is the same cancer that Steve Jobs was diagnosed with.  A short time after my initial surgery and treatment a friend asked if I would go running with him.  At first, I declined.  Figuring I wasn’t in shape, he would be frustrated running with me because I don’t run fast and I was sure I wouldn’t be able to run very far. This was a big worry of mine since the friend asking me to run with him was a marathoner.  At the time I wasn’t running with any schedule, group of friends or plans.  Mostly I was just running trying to keep up with my boys.  He finally wore me down with his repeated invitations and shortly after our first few runs I found myself entertaining the idea of running a marathon. 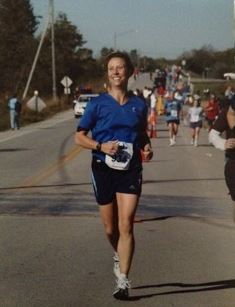 So, for my first marathon I joined a great group, FTM (First Time Marathoners) with the local running club.  Training was fun and all was going well.  I really enjoyed the camaraderie of the group.  About a week before the marathon I had severe pain in my stomach, it only lasted a night or so, but then came back the day before the marathon.  I was so looking forward to my first marathon I dismissed the pain, as if I ignored the pain it would go away.  So, when most people are carb loading, I was not able to keep anything down.  I ran the marathon as scheduled, because if it is on my calendar I don’t cancel.  I finished, but not with the time I was planning on.  I actually had to walk about the last 6 miles.  Of course my running partner informed me I can not count that as running my first marathon because I didn’t run all of it.  So, of course there were to be more marathons in my future.

After the marathon I followed up on the pain and sure enough the cancer had come back.  The past 10 or so years have been spent receiving multiple treatments to keep the cancer at bay. The cancer originally started in my stomach and had spread to the liver, spleen, pancreas and several lymph nodes and a couple places in the bone.  Treatment consisted of surgery, chemotherapy and a radiolabled therapy not offered in the U.S.  So, along the way I had what seems like most of my internal organs removed due to tumor, including my pancreas.  The pancreatic surgery probably had the biggest impact on my running.  Following that surgery I am now a brittle diabetic.  Brittle meaning that it is almost impossible to keep my blood sugars in the normal range and I often experience wide swings in my blood sugar levels.

Running has helped me make it through all the treatments and recovery time.  That and the incredible support from my running partner who always had the confidence in me to come back from each treatment.  And, of course, the incredible support of my family for always backing my crazy plans for marathons.  Running is such an incredible lift emotionally.  Even when I was running so slowly you could barely call it running, the fact that I was out there made me feel strong and confident.  A feeling of being able to take on anything.  The fact that my running partner met me for each scheduled run was just what I needed.  Even though at times I was barely able to get out of bed.  But, if it is on the calendar and someone is scheduling their time to meet you for a run, what can you do but get up and put your running shoes on.

Over the years, I have since completed 14 marathons, several ½ marathons and 10Ks.  Some better than others but all of them fun.  I am still running with my running partner and we have racked up quite a few very amusing running stories.  Sometimes I don’t know what I find more fun; running or relating some of our wacky marathon stories.  I don’t plan on retiring from running.  Running has meant so much to me and I am so grateful that am able to continue to run.  I am so convinced that running has extended my life.  I want to share the fun of running with others.

Last November I directed my first 5K run/walk to raise awareness for Neuroendocrine Cancer and help support research for this under recognized cancer.  All proceeds from the run went to The Abramson Cancer Center at the University of Pennsylvania directed towards research for Neuroendocrine Cancers.  We had so much fun at the 5K last year, I am looking forward to hosting the second annual Run for the Stripes at the Philadelphia Zoo on November 9, 2013.  November 10 is Worldwide Neuroendocrine Cancer Awareness Day.  My next marathon is the Chicago Marathon and of course I plan on running the Philadelphia Marathon again this fall.  I am looking forward to having a fun time at both marathons.