Hi, I’m Kristi and I am writing this story not for myself, but for my daughter. Her name is Emily Wilkinson and she is only 8 years old. On October 17, 2012 Emily was diagnosed with having a Neuroendocrine Tumor. 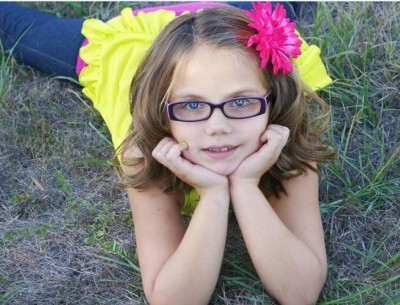 Emily had been sick on and off for nearly a year. We had been to the pediatrician and ER at least a half dozen times in the past year. We had received diagnoses such as acid reflux, indigestion, possible IBS, possible Crohn’s disease, and everything in between. Emily had CT scans of her abdomen on four separate doctor’s visits throughout this year. All directed at her for possible appendicitis. All of them were negative.

In late September Emily was hospitalized for four days at our local Children’s Hospital. On the particular morning I had rushed her to the ER once again in a state of pure worry and desperation!

Throughout the previous 2 months she had lost so much weight. August 1st Emily’s weight was 71.9 pounds; upon admission to the hospital in late September she weighed in at 57.6 pounds. That was a loss of nearly 20% of her body weight. During this hospital stay Emily was tested for different intestinal bacteria, all tests came back negative. We saw a GI specialist. After his consultation this doctor was leaning towards an inflamatory bowel disease and wanted to schedule Emily for a endoscopy and colonoscopy. Emily was given fluids for the next 4 days and then sent home. We had her scopes scheduled for October 25th which was another month away.

About a week later, one of the residents from Children’s, who worked along side the GI specialist, called to check and see how Emily was doing. I informed her that her situation hadn’t changed. Still the same symptoms. After our conversation, Emily’s scopes moved forward and we were now scheduled to be at the hospital the following Monday, October 15th for the scopes.

The 2 days prior to the scopes, Emily seemed to get even sicker than before. She developed a fever and slept almost the entire weekend. I thought about taking her to the ER but since it was now Sunday and we were to be at the hospital the very next day, I chose to wait it out and we would just see the doctor the next morning.

By Monday morning Emily couldn’t walk. She was doubled over and in pain. We checked in for surgery and got back to our room. The doctor came in and after examination of Emily he decided to get a CT scan of her abdomen to see what was going on. He was concerned that she may have a bowel perferation due to rebound pain. It took just a few minutes for the scan and the results were there right away. Her diagnosis, ruptured appendix. How could they have missed this? She was in the hospital just 2 weeks prior to this. If they had found this before now she wouldn’t be in such pain and her life wouldn’t be in danger due to the infectious fluid that was lingering in her abdomen. Now a simple scope has turned into an emergency appendectomy.

Surgery went fine and we spent the next 6 days in the hospital. Emily was very sick and seemed almost lifeless for the next 3 days. Didn’t really wake up until the 2 days after surgery. It was awful! On the 2nd day after surgery the Dr came in and asked to speak with me privately. I was blind to the fact that Emily was placed on the oncology floor, that we were surrounded by children who all are suffering from CANCER.

The walk to the conference room was like something from a nightmare. The hallway, like a tunnel, and everything, slow motion. As we walked I looked into the rooms we passed. I realized that every child either had no hair, feeding tubes, looked fragile and ill. They were all cancer patients.I hadn’t noticed this before now? How?

We walked into a small room, the doctor pulled a chair out for me to sit. He slid a box of kleenex in front of me, I pushed the box back to him, almost refusing them. I did not want to have to NEED any kleenex. All I wanted to do was put my hands on my ears like a child so I didn’t have to hear what he was getting ready to say. He proceeded to tell me that during surgery he found a “suspicious spot” on Emily’s appendix, the pathology results confirmed that it was a Neuroendocrine Tumor, it was CANCER. I sat and listened.

In his career the surgeon had never treated a child with a NET. It’s extremely rare in a child. The statistics were around 2 in 14 million children are diagnosed with NET and MY CHILD was now one, her Ki-67 level was from 5% up to 22%, which meant it was more aggressive than the typical NET. Her tumor was 2cm. This is the cut off for a tumor, this means that it is more than likely to have spread beyond it’s primary site. It was only 1mm from the serosa. All of these factors are concerning and put Emily in a higher risk situation. However, there at Children’s they “just weren’t clear” on what the next steps should be for Emily. My world had officially been turned upside down. My little girl had cancer, I was heartbroken. 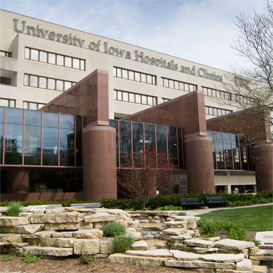 After the initial shock was over and I went into “let’s fix this issue” mode I began to research NETs. I found that there are only a handful of NET specialists in the country, in our area there are none. Also it’s extremely important if someone is diagnosed with a NET they must be evaluated by a NET specialist. I would have traveled across the world if I had to to get Emily the proper medical attention she neeeded. The nearest NET specialist to us was at University of Iowa in Iowa City.

After a few phone calls to UNI and some long nights of endless research and worry, I recieved a phone call from hemotology/oncology specialist Dr. Sue O’Dorisio. After our conversation Emily got accepted by Dr. O’Dorisio. We set up an appointment for November 15th. Emily had a full battery of tests including a Gallium-68 scan, which they are currently doing for a clinical trial at UNI. Their recommendation, Emily needed a right-hemicolectomy. So on December 21 Emily had this surgery. We spent our Christmas in the hospital. It wasn’t as bad as one would think. It will be a Christmas we won’t forget.

Today (January 1, 2013) Emily is 12 days post-op and she is doing amazing. We found out the pathology yesterday,there is NO better way to start the New Year than knowing my little girl is cancer FREE!! She is healing perfectly and actually will be going back to school on Thursday. Probably will do half days for the first few to see how she does. I expect she will be fine. She is so strong and determined!

She will have blood tests every 3 months for the next 5 years and then every 6 months for 10 years. One of my concerns is that in so many cases I have read about and researched, NETs most always seem to come back at some point. Maybe I am wrong? I would like to think that Emily is an exception. I belive that my Emily is one of the “lucky ones” That we caught her cancer right at the perfect time and this surgery has taken care of ALL of it FOR GOOD!

The stories I have read about carcinoid patients are an inspiration to me. Thank you for sharing all this information and support. It has helped my family through one of the worst things we have ever had to deal with. God Bless and Happy New Year!!! 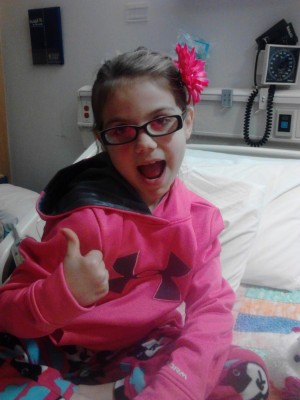