I know cancer is not a pain of itself but it does cause it. Over the years I have been living with a pain that I hid from a lot of people including myself. It wasn’t until July of 2008 that I could not take it anymore. Was I scared, was I stupid, was I selfish, or was I just in plain denial? Why would I have cancer? No one in my family had it. I was expecting some type of other problems over the years like a stroke or a heart attack, but never cancer. 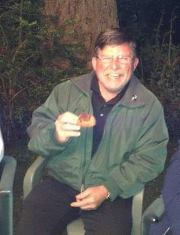 Back in March of 2000, I was getting ready for a business trip and two days before I became really sick. I lay in bed and my stomach began to swell up. It was so big I could not touch my fingers putting my elbows on my side. My wife and daughter came home and could not find me for a little while. I didn’t want to yell out once they found me in bed. I told them I was going to be ok. For two days I could not move, I could not breathe or swallow. The pain, have you ever had someone give you a strong grip handshake? That is what it was like for twenty four hours a day in my stomach. After a few days, it went away and I was fine for a long time.

In 2006, it started again, the same pain and swelling. As time went on I would come home from work knowing that I had a few hours to be alone because my wife would be working at her business. I would come into the house get up the stairs and go right to the floor in the living room and lay down. I would stay there until the phone rang or I heard a car door. I’d get up and try to act as if everything was fine. I felt like being sick but I would have to talk myself out of it and hold it in. Days, weeks, months and years went by with the pain and swelling and still I told no one.

Eventually, my pain started to show. My family knew there was something wrong, so did I, but I made excuses for it – I just didn’t feel good; something I ate; work stress, etc. High blood pressure became an issue and some excessive medication really helped out my excuses. I even made two trips to Ireland in 2006 and 2008 with my son following each of his two tours of duty in Iraq. The pain was still there, but it didn’t matter, I was with my son. Restrooms became my new best friend.

I was finding that going to the bathroom started to relive some of my pain. It became very painful going, but it was a new pain. I never had any pain pills but I always wished I could get some. I can only describe my new pain as, for a boy or a man if you were kicked or fell on your private area, that pain…all the time. Sleep or not, standing or sitting, eating or drinking. That pain started the first part of 2008 and in July I could not take it any longer.

The Sunday after the 4th of July, 2008 I could not take it any longer. I finally told my wife and my daughter I needed to see a doctor. Several doctors asked about my pain level, out of ten, ten being the worst. All I could say was I was at a twelve. They asked all the fifty-plus year questions, chest pain, shortness of breath, and so on. I told them I was having a lot of stomach pain. The time finally came to get checked out. Finding out what I had was to be difficult.

A battery of tests followed: upper and lower GI’s, scans, blood tests and more. The doctor told me I wasn’t going anywhere for a few days. I was having a hard time communicating with the nurses and from what I was told my blood pressure really started to climb, 230/160 and more. I didn’t know what was going to happen.

My surgeon came in to talk with me. He told me he was going to perform an operation and find out what was going on. He said he was going to do it laparoscopically and he would see me later. That night he came in and said he had removed a carcinoid tumor although he was not able to do it laparoscopically. I had an incision all the way up. He told me it was cancer and that there were two spots on my liver that were of interest. Both my surgeon and oncologist were concerned with the area on my liver. My oncologist told my wife and I that he was classifying my carcinoid cancer as a “Stage Four.” I was told my prognosis would be two to five years.

After my staples had been removed I began a number of tests again. A cold twenty four urinalysis test, four day nuclear injection scan, blood work, and some treatments. The pain continued. I could not sleep, didn’t feel like doing anything. I was depressed. I was fatigued, and didn’t know what was going on. Carcinoid syndrome had taken over my life.

I started keeping a journal writing down my thought and activities. I went back to work in late August 2008 but it was a trying time for me. November came and I was still in pain. The oncologist said it was time to do a little alternative to chemo. A therapeutic injection was made and another CT Scan. I had a scheduled appointment with my surgeon for the middle of December but he calls me at work and said he wanted to see me right away. He said he really needed to get back in and remove a large mass that was identified with the last CT Scan as well as tumors on my lymph nodes and on my liver. He said if I did not choose to go ahead with surgery, he would be able to give me some medication to relieve some of my pain for the time I had left with my life. I told him I could not deal with this pain any longer that I wanted to do it. He warned me that there would be some upfront problems but he was planning to remove all of my small intestines and would put in a small section to connect my stomach to my colon. He also said I would end up with a feeding tube for the rest of my life.

My second surgery was scheduled for January 7th 2009. The surgeon told my wife that everything went well and he was able to get a lot of the tumors. The problems he had thought he might have did not happen. He removed the large mass and other tumors with it and there would be no feeding tube. He did say however, that he didn’t get it all. Coming out of recovery into my room at the hospital I was asked how I felt. All I could say is I had not felt this good in years.

Afterwards though, the pain continued daily, all day and night. It was about an 8+/10 all the time. I continued to work the best I could but I went to my oncologist and told him he needed to do something about the pain. He sent me to a pain specialist who did a surgery to implant an Intrathecal Pain Pump in September 2009. From the time I woke up in recovery my pain level was down to a solid two (2). I felt “Great”. With the small setback of an infection just over a few weeks, I was still at a “2”. I was getting 200 mg of morphine 24 hours a day.

I was referred to a world renowned carcinoid specialist at the University of Oregon who told me my pancreas was shutting down. In March of 2010 I developed a bad leak in my back where the catheter from the pain pump went into my spine. The pain specialist did another surgery on my back and although it stopped leaking, he was a little puzzled. After two weeks it started to leak again. He had to remove the pain pump. I had developed a very bad case of MRSA, and ended up with a PIC-line. I had to give myself IV’s for 45 days. After that it was six weeks of medication. What an experience! During this time I was taking medication and was still going to work. One morning while driving to work I fell asleep and ran off the road and wrecked my car. Fortunately, I didn’t hurt myself, just little shaken up.

I planned to start using my sick leave again and get ready to retire after 37 years. I left work the middle of September 2010. The first week out I spent everyday at the doctors. I developed jaundice. In the mean time I had made an appointment with the pain specialist again and it was decided to implant another pain pump. After more testing it was determined that my gallbladder needed to be removed. The doctor had to leave one of the areas opened and let it heal from the inside out. Three weeks later I went in for another surgery to have the pain pump implanted.

I’m back to 200 mg of morphine 24 hours a day. Everything is healing up and I feel great. Cancer has really changed my life. The Intrathecal Pain Pump has also made a change in my life, a big change. This pain pump has given me a new way of thinking about my cancer. I can deal with it better without so much pain. I just can’t believe that one doctor changed my entire life like that. What a lesson learned for me.

Something new for me.  Back in April of this year, 2012 I had a grand mal seizure.  Ended up in ICU.  In June had another.  A new doctor said he wasn’t sure what cause them but he didn’t put me on anti-seizure medication after the first one.  After the second one he started it with me.  It sure plays havoc on me.  Can’t drive any longer and can’t do a lot of things. . . All my doctors have told me that they don’t know if these seizures are associated with or by carcinoid.  My wife just turned me on to a site on Facebook and shared a story with me about a young lady who just experienced a first time seizure and they found it to be associated with the placement of her intrathecal pain pump.  Not too sure want to think about all of that yet.

My wife, Raelene ,has been very supportive. I could not have gone through all of this her. A few (very few) friends have been supportive too.

I heard something awhile back ago that when a person is told they have terminal cancer that is all they can think about. You don’t know how true that is. I will have to say this. . .I have heard that cancer changes lives all over.  Cancer seems to bring families and friends closer.  In my case that has not happened.  Not sure why but it has driven my family and friend apart.  It sure hurts.  I have a lot to do. I have taken care of most of my business. I care a lot about my family and my friends, of the ones that I have, they all mean a lot to me.

I started this Carcinoid Story shortly after I was diagnosed.  I have tried to keep it up to date and as you can read I have changed over the months.  Not too sure what is going to happen over the next day, weeks, months, or years.  I hope to continue living and fulfilling my dreams.