When Staff Sergeant Daniel Barber of D Company 1-106th AVN in the Missouri National Guard was first diagnosed with carcinoid cancer in 2009 he experienced feelings of shock, despair, anger, fear and frustration.  But he was also relieved because he knew the symptoms he had been experiencing for over a year were not all in his head, as had been suggested to him. From that moment on the Missouri native, who describes himself as “having a little mule in me,” began a journey that is both typical and unusual for a carcinoid patient.

“I wasn’t going to wait and see,” says Staff Sergeant Barber, “especially when someone tells me I have one to three years to live.”  The 42-year-old soldier has demonstrated strength and courage all of his life.  A graduate of Linn State Technical College, with a degree in aviation technology, Staff Sergeant Barber talked to a friend about joining the Army National Guard in order to pay for his college loans.  And thanks to the United States Army college payback program he became debt free and on his way to basic training at Fort Knox, Kentucky in 1989.  Today he holds dual status as a member of the Missouri National Guard and as a Quality Assurance Specialist in the Army Aviation Support Facility (AASF) #2, Fort Leonard Wood, Missouri, working on UH-60 Blackhawks helicopters. He is a technical inspector who also trains mechanics. 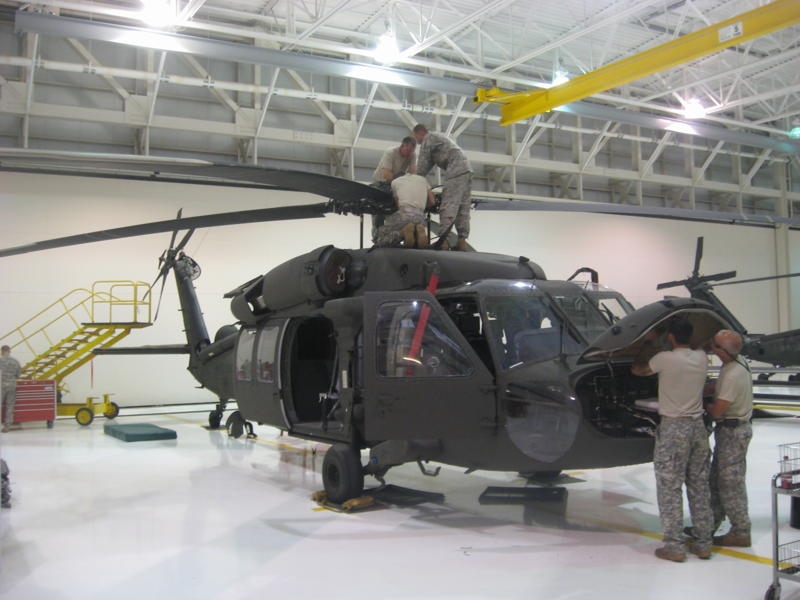 Soldiers at work on a UH-60 Blackhawk helicopter in Missouri

Staff Sergeant Barber’s first deployment as a civilian soldier was in 1990 for Operation Desert Shield/Desert Storm, where he spent six months in Saudi Arabia, Iraq, and Kuwait. He was part of the 1267 Medical Company, responsible for UH-1H Hueys Medivac helicopters.  He has since been deployed twice more, from 2003 to 2005 and from 2008 to 2009, serving both times for Operation Iraqi Freedom Delta Company.

Before leaving on his last deployment, Staff Sergeant Barber began to experience the symptoms that would later lead to his diagnosis.  After eating he would become warm and flush.  His trigger foods were milk and milk products as well as spicy foods.  Stressful situations also caused physical reactions.

Upper and lower GI tests led Staff Sergeant Barber’s doctor at the time to diagnosis him with esophagitis gastritis.  “The doctor prescribed some medication to cut down on my stomach acid and sent me on my way.” Cleared by an internist and flight surgeon, Staff Sergeant Barber deployed with his unit to Iraq.  Still not feeling well when he returned to the States, Staff Sergeant Barber sought a new family physician, describing all of his symptoms, including pain under his rib cage upon outtake of breath.  An ultrasound was ordered and it was determined that Staff Sergeant Barber’s gallbladder was normal but the spots on his liver were not.  A CT scan followed as did an Octreoscan and blood work. The diagnosis was high-receptor carcinoid tumors, a midgut primary tumor in the mesentery, and more than 50 tumors in his liver.

After his physician admitted he didn’t really know much about carcinoid cancer, Staff Sergeant Barber sought guidance from the Heartlands Carcinoid Support Group.  He talking to the other patients about how they were being treated and doing as much research as possible. The physician who stood out to Staff Sergeant Barber for a second opinion was Dr. Jean F. Botha, Director of Hepatobiliary Surgery and Director of the Living Donor Liver Transplant Program at the University of Nebraska Medical Center. [Please note:  since Staff Sergeant Barber’s story was first published, Dr. Botha has moved to practice in South Africa.)

Staff Sergeant Barber went to his appointment with Dr. Botha hoping he could have a two-stage liver resection.  After reviewing Staff Sergeant Barber’s scans and history, Dr. Botha did not feel he was a good candidate for the procedure and recommended three other options:  a liver transplant, a multivisceral organ transplant (transplant surgery that includes more than one organ), or PRRT (Peptide Receptor Radionuclide Therapy) followed by surgery and a small bowel resection, if the Staff Sergeant had the monetary means to pursue PRRT in Europe. As a soldier, husband, and father of a seven-year-old son, the choice was clear – PRRT – but how would the finances be made possible?

Staff Sergeant Barber was transitioned into the Army’s Wounded Warrior Program (AW2), the official Army program that serves severely wounded, ill, and injured soldiers, veterans and their families wherever they are located, regardless of military status, for as long as it takes. The program was initially established in April 2004 as the Disabled Soldier Support System (DS3).

HACE (hepatic artery chemoembolization) treatments began for Staff Sergeant Barber on October 16, 2009, with injections to the right side of his liver, and then in November to the left side of his liver. It was “wait and see” approach when a CT scan one month following the treatments showed mixed results.  During this time, Staff Sergeant Barber ran out of both sick leave and vacation time.  But due to an extraordinary show of support on behalf of his colleagues, 192 hours of their vacation time was donated to the Staff Sergeant so that he never missed a paycheck. On November 30, 2009 he joined the Warrior Transition Unit (WTU).

WTUs provide critical support for soldiers who are expected to require six months of rehabilitative care and the need for complex medical management—and their families. The units have physicians, nurses, squad leaders, platoon sergeants, and mental health professionals. These leaders are responsible for making sure wounded soldiers’ needs are met, their care is coordinated, and their families are taken care of. The success of the WTU system is based on its “triad of care.”  The triad is comprised of a squad leader, nurse case manager, and a primary care physician.  These professionals put the soldier first, cut through red tape, and take care of the details.

Fortuitously, Brigadier General Gary H. Cheek, Assistant Surgeon General of Warrior Care and Transition and Commander of the Warrior Transition Command, was visiting Missouri when Staff Sergeant Barber was in the WTU. Staff Sergeant Barber was given the opportunity to discuss his case, treatment plan, and insurance issues with the Brigadier General and with the WTC’s then Command Sergeant Major, Ly Lac, both of whom were both very supportive of the care plan and policies in place to pursue PRRT treatment with Dr. Richard Baum at Zentralklinik, Bad Berka in Germany.

The health policy in place that allowed Staff Sergeant Barber to pursue PRRT treatments is offered by TRICARE, the  U.S. Department of Defense Military Health Program. In a little known section of the health policy,coverage for treatment of rare diseases is available on a case-by-case basis.  Utilizing information such as national expert opinion organizations and trials published in refereed medical literature, if the “case review indicates that the proposed benefit for a rare disease is safe and effective for that disease, benefits may be allowed.”

After being sent to the Walter Reed Army Medical Center in Washington, D.C. to consult with an oncologist, who was also supportive of Dr. Botha’s referral to Dr. Baum and care plan, Staff Sergeant Barber’s records were sent to Dr. Baum for review and Dr. Baum concurred that he would be a good candidate for PRRT.  Word came down that approval had been granted for Staff Sergeant Barber to travel to Germany and arrangements were made for his trip there this past May.

Once again the Warrior Transition Unit was extremely proactive in providing support.  Staff Sergeant Gagne of the WTU in Sweinfurt was assigned as Staff Sergeant Barber’s squad leader and he was there to meet him at the Frankfurt airport, to transport him to the Army base in Sweinfurt to rest before the PRRT treatments, and then toBad Berka.

On Sunday, May 9th Staff Sergeant Barber checked into the clinic at Bad Berka and on May 10th had his kidneys tested followed by a consult with Dr. Baum. A Gallium 68 DOTATOC PET/CT scan on May 11th revealed that his tumors were expressing high amounts of somatosatin receptors, a necessary requirement for PRRT. On May 12th he had his first treatment, a 15 minute procedure. “You can feel every hair on your body stand up, you’re antsy, the adrenaline is flowing,” is how Staff Sergeant Barber describes what it felt like to wait for the procedure to begin. Then came the recuperation period.  While he describes the procedure as tolerable he was also nauseous, weak, disoriented at times, tired and lost 12 pounds.  The trip home was difficult.  But it was all worth it, especially when Dr. Baum told him that with 3 to 5 treatments he would expect Staff Sergeant Barber’s disease to be stabilized and that he would live for a long time.

Life has improved for Staff Sergeant Barber since he completed his first PRRT treatment.  He no longer experiences flushing and has discontinued Sandostatin.  He just completed a second PRRT treatment, which he tolerated well, and a good response to the therapy was shown on the follow-up Ga-68 DOTATOC PET/CT before the second cycle. 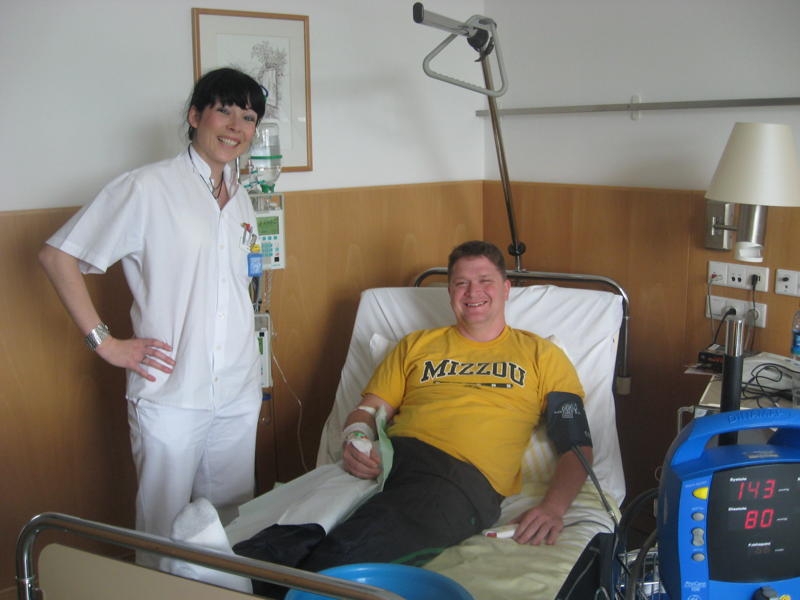 This is all wonderful news for Staff Sergeant Barber’s wife, Deanna, and his son, Luke, who entered 3rd grade in the fall of 2010.   One of the greatest challenges of living with carcinoid has been to “keep my life on track for my wife and son.”  Making sure that Luke gets to school and his activities and that Deanna has support when he is deployed or in Germany for treatments is difficult but Staff Sergeant Barber describes his wife, who comes from a military family, as a “trooper.”  Her support is also invaluable for Staff Sergeant Barber.

The five most important things Staff Sergeant Barber would recommend for other carcinoid/neuroendocrine cancer patients are:

What does the future hold for Staff Sergeant Barber?  “The Army leaves no soldiers behind,” he says. Thanks to the best medical care and leadership made possible by the Army, a wonderful family support system, excellent insurance coverage, guidance from a carcinoid support group, hope, a positive attitude, and faith, the future looks very bright for Staff Sergeant Barber.

Dan Barber shared this update in August 2017:  “Since my first story I am still doing well. Walter Reed Medical Center referred me to the National Institutes of Health (NIH) GA-68 clinical trial. No new progression for last 3 years. I have since retired from the military 2 years ago and have been enjoying life to the fullest. Dr. Eric Liu is monitoring my condition and scans. His new prediction is that Something other than my cancer will dictate my expiration date.” 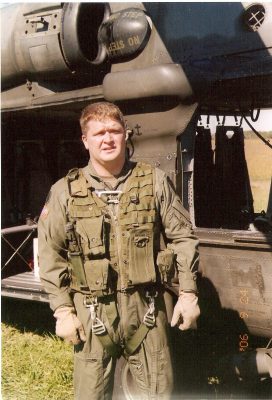