Lisa also shares her journey in the May/June 2013 issue of Coping with Cancer magazine. Read the article here.

(Lisa’s Story below was posted in October 2011)

It’s easy to get caught up in the hype of “back-to-school” season.

I understand this, because I’ve been there. 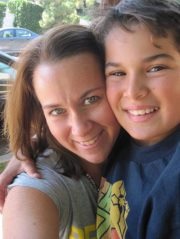 The month before Joshua (pictured with mom, Lisa, above) started Kindergarten – even though I was working a part-time job at a non-profit, shuttling my two small boys around town to their various activities, and managing our unmanageable household — I deemed it necessary to spend hours upon hours shopping for the perfect little backpack for Joshua’s grand entrance into academia.

I began the quest by visiting all the major local retailers.  I stopped in at several specialty shops.  I tried the sporting goods stores, toy outlets, and even a couple of luggage places.  When all of these options failed to produce my ill-defined concept of that perfect backpack, I turned to the internet – Lands End, LL Bean, amazon.com.  In the end, I went with a junior-sized, monogrammed, Carribean-blue, featherweight variety.  It looked adorable on Joshua.

I went through the same process with the lunch box that would go inside the backpack, and then with the thermos that would go inside the lunch box.  And don’t even get me started on my journey to satisfy the school supply list – that beast involved five different office supply stores.  I was determined that Joshua would have all the correct quantities, requested brands, and specified colors of the various items that were apparently essential to the scholarly well-being of my five-year-old.

I selected the perfect first day-of-school outfit for Joshua.  I even “suggested” that we go ahead and lay out his entire first-week-of-school clothing choices in the cubbies of the new, specialized closet organizer (with Monday-through-Friday compartments) recently purchased for this task.  After some consideration, I also went ahead and bought him a pair of Skechers sneakers – even though they cost $45 and he’d probably outgrow them in a month.  (All the little boys did seem to be wearing them.)  Finally, I took him to get a haircut.

It was all a lot of work.  It was also rather stressful to get through that big old to-do-list in time for the start of school but hey, in the end, my little boy was officially “ready”.

Three years later, my younger boy, Jonah, started kindergarten.  I had actually relaxed quite a bit by then about the whole back-to-school venture, realizing that if I couldn’t find the specified 20-count Crayola box after the first couple of stores I’d gone to, the world wouldn’t end if I sent him to school with the 24-count variety.  Also, when he told me that he didn’t even waaaaant a haircut, I let the haircut thing pass.  To make up for looking like a slacker-mom though, I went ahead and signed up to be a volunteer in the classroom and to chaperone field trips.

Outside of school, of course, I planned to continue my duties as Team Parent for both boys’ soccer teams.  I was also simultaneously looking for a new job and training for a half-marathon in my spare time.
You get the idea.

About two weeks after Jonah started Kindergarten, I – a non-smoker who was previously considered to be a healthy, fairly fit individual — was diagnosed with a rare form of lung cancer, an atypical lung carcinoid.  I had lost my own mother, also a non-smoker, to lung cancer right before getting pregnant with Jonah.  As a result, when I was first diagnosed, I feared the worst.  I feared that I might not be around to send my boys back to school in the future.
The doctors seemed convinced that the cancer was localized to my lung – a very good thing, the treatment result being that surgery was recommended.  My overall prognosis seemed quite positive, so I underwent major surgery that fall.  Half of my left lung was removed.

I didn’t see my boys the entire time I was in the hospital — eight days of misery — because kids weren’t allowed into the critical care unit.  Beyond that though, I didn’t want them to see me connected to the chest tubes, the IVs, the morphine epidural, or the various breathing apparatus.  For the first time in my life as a mom, because of the intense levels of post-surgical pain, I also didn’t want either of them to enthusiastically hug me.  It was the longest I’d ever been apart from them.  I went home to begin my recovery on the day of Joshua’s third-grade fall concert, his “Black Light Show”, so I missed that.  It was the first big school event of his life that I hadn’t been there for, and that was very hard for me.

I was in horrible physical pain for months after the surgery – and horribly depressed.  Halloween was soon after the Black Light Show, but I wasn’t up for trick-or-treating.  I also wasn’t allowed to drive for the next two months due to heavy pain medications – so I missed an awful lot during that time.

Somehow, my amazing husband stepped up and managed to take care of all of us and, somehow, I managed to recover from my surgery, although it took many months, and most of the school year had passed before I really began to adjust to my new “normal”.  I was exhausted – physically and emotionally.

Eventually, last fall, we found ourselves at the beginning of another new school year and though I’ve racked my mind to try to remember, I don’t actually recall doing any of the usual back-to-school preparations.  That school year passed somewhat uneventfully and it has now been two full years since my diagnosis.

It is “back-to-school” time once again, and it now means something quite a bit different than years past.

This year, I can truly say that I don’t care what my boys wear on their first day of school.  I don’t care which Star Wars character is on Jonah’s thermos.  I don’t care what color Joshua’s lunch box is, and I don’t even really care that the school supply list said 24 “sharpened” pencils.  I doubt I will get around to actually sharpening them.  Call me a rebel – but I’m going to send them in anyway.  I suspect that the world will go on spinning despite copious quantities of unsharpened pencils and I realize — for real this time — that none of these details really matter.

So I take a deep breath, because I can – and I simply hope.

Because for me, what does matter is hope.

First, I hope for all the usual things that all moms hope for when kids go back to school.  I hope that my boys make lots of new friends this year.  I hope that this is the year that they both make straight A’s.  I hope that nobody gets bullied, that my kids actually do their homework without me nagging at them constantly, and that I don’t get any calls from the teachers about any playground incidents.

I take an even deeper breath.  Hope matters, and so I hope for the thing that matters to me most.  I hope that next year I will still be here as my boys once again go back to school.  I hope to send them off with new, though generic-brand, shoes on their growing feet, and with unsharpened pencils tucked away in their not-so-perfect, crumpled-up-paper-filled, slightly-gooey-crumb-bottom-lined, backpacks.