A very important clinical research report  is published in the May issue of The American Journal of Gastroenterology  (Margaret Frank et.al. Combination Therapy with Octreotide and alpha-interferon:effect on tumor growth in metstatic endocrine gastroenteropancreatic tumors. Am J. Gastroenterology 1999 94:5;1381-87)  These investigators at the Philipps University in Marburg, Germany in a well designed prospective study clearly demonstrated the effectiveness of combination therapy with octreotide and alpha-interferon (Intron-A) in inhibiting growth of metastatic neuroendocrine gastroenteropancreatic tumors.  They evaluated the effect of this treatment in 21 patients of whom 9 had carcinoid syndrome, 8 had non-functioning tumors and 4 had gastrinoma.  All patients had progression of their tumors demonstrated by CT scan prior to starting the combination therapy.  This included 16 patients on octreotide ( 200 µg tid) prior to the addition of alpha-interferon ( 5 MU tiw).  Inhibition of tumor growth  occurred in 67% of the patients including 11 who had previously been on octreotide alone.  Survival was significantly prolonged in the responder patients, both while on the treatment and after stopping it.  These findings support previous impressions that octreotide and alpha-interferon together act synergistically and also confirms the 1993 report of the Swedish researchers, Drs. Öberg, Eriksson and Janson, that this combination treatment caused better biochemical response in most carcinoid syndrome patients and tumor stabilization in some.  Furthermore it also supports the general observation of a number of other workers in the field, including myself,  that this combination treatment produces a much greater benefit  in regard to tumor stabilization or regression than does either of these drugs alone.

The anti tumor growth effects of octreotide treatment in much larger doses than those needed for controlling  the endocrine symptoms of functioning carcinoid tumors have been proposed by some researchers.  It remains to be determined if even better treatment results can be obtained with an  increase in the octreotide dose  beyond the relatively moderate dose used in the German combination treatment study group.

ADDENDUM (2001) During the past year presentation of new data evaluating this combination therapy is felt by some to indicate no advantage over monotherapy. However, others including myself feel that this new data is inconclusove and still adhere to the concept of increased benefit of the combination treatment 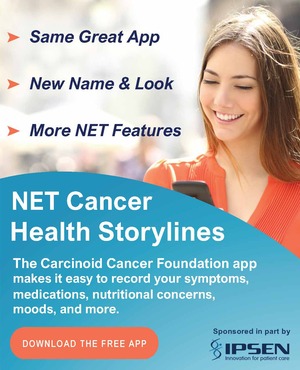