Imagine having a nuclear scan that can change the course of your health and future — at no charge! Carcinoid and NET (neuroendocrine tumor) cancer patients have this opportunity by participating in the National Institutes of Health (NIH) clinical trial, Evaluation of 68Gallium-DOTATATE PET/CT for Detecting Neuroendocrine Tumors (NETs).  The NIH study is especially timely as the radiopharmaceutical Gallium-68 was granted orphan drug status by the US Food and Drug Administration (FDA) in November 2013. This designation is significant because it may lead to faster approval of the agent, which would greatly benefit carcinoid/NET patients in the United States.

For those who are living with a NET or suspect they have a neuroendocrine tumor the “gold-standard” of nuclear imaging in the United States is the octreoscan.  Used in Europe,  Canada and Australia, the Gallium-68 (GA-68) DOTATATE PET/CT scan is a higher-resolution scan, able to detect tumors not seen on MRI, PET, CT, or octreoscans.  Because the Gallium agent binds very strongly to the somatostatin receptors 2 and 5 of the neuroendocrine tumor cells, it can more effectively detect very small tumors and metastases.  This is very important for NET patients as from the initial onset of symptoms — including gastrointestinal pain, flushing, diarrhea, and asthma-like wheezing — the average time to proper diagnosis exceeds 5 years.  It is likely that tumors will spread (metastasize) and grow during this time. 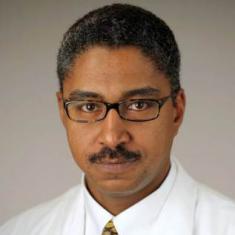 Electron Kebebew, MD (pictured), Chief of the Endocrine Oncology Branch at the Center for Cancer Research, National Cancer Institute and Head of the Cancer Genetics/Genomics Section, is the Principal Investigator for the NIH Gallium 68 trial and Samira Sadowski, MD, a Clinical Fellow, has spearheaded the 68Gallium DOTATATE protocol as the lead co-investigator.

According to Dr. Kebebew, “the possible benefits of Gallium-68 DOTATATE scanning are earlier diagnosis for symptomatic patients and the ability to tailor treatments for patients based on a more accurate assessment of tumor burden.”   Dr. Sadowski notes that by “finding additional lesions or an unknown primary, physicians can manage patients based on what has been found.”  Gallium-68 DOTATATE is particularly sensitive at locating small lymph node metastases, adds Dr. Sadowski.   The GA-68 scan can detect tumors as small as 4 millimeters.  This information can be used in targeting treatments for each patient.

The GA-68 scan may also provide additional information, says Dr. Sadowski, such as if a tumor is well or poorly differentiated.  Poorly differentiated tumors are more aggressive and with the GA-68 scan the likelihood of a tumor’s growth may be determined.  According to Dr. Kebebew, the GA-68 scan is also important for NET patients who have had surgery to remove metastases but have an unknown primary tumor.  And for patients with known recurrence, he says, GA-68 DOTATATE may show much more than other scans.  As NET cancer varies significantly from patient to patient the results of the GA-68 scan, along with other scans, medical history, blood work, and 5-HIAA urine test results, enable the medical team to offer each patient a personalized approach to treatment options.

The purpose of the trial is see how well the experimental imaging agent, 68Gallium-DOTATATE, detects an unknown primary NET and metastatic NETs in the gastrointestinal system and pancreas.  Surgery is considered essential in the treatment of neuroendocrine tumors, when possible, and by finding NETs earlier, the success of surgically removing tumors is increased, both enhancing patients’ quality of life and length of life.

Adults over 18 years of age with a suspected NET, a NET identified by biopsy, or family history of NET (including MEN1 and Von Hippel Lindau) are eligible for the study.  The goal is to enroll 100 participants and studies have already begun on 30. Participants in the trial will undergo 3 scans: a standard CT scan of the chest, abdomen, and pelvis; an octreotide scan; and a 68Gallium-DOTATATE PET/CT.  For the Gallium scan the study drug is injected into a vein, usually the arm.  Low-dose X-rays go through the body.  For about 40 minutes a large, donut-shaped device takes images of the body.  The entire session takes between an hour and a half and two hours.

Images from the three scans are compared.  Patients also undergo a series of blood tests, specifically markers for neuroendocrine tumors such as chromogranin A, neuron-specific enolase, gastrin, and pancreatic polypeptide.  The urinary 5-HIAA is also used to test serotonin levels. Upon completion of the nuclear imaging, blood work, and 5-HIAA test, physicians at the NIH in discussions with local treating physicians can usually recommend the best course of treatment for each participant.  This treatment can be done at the NIH or at another facility of the patient’s choosing. Patients in the trial will have 1 follow-up visit at the NIH each year for a period of 5 years.  This monitoring will include a medical exam, blood work, and a CT scan.

Suzi Garber of Warminster in Bucks County, Pennsylvania is extremely grateful to have participated in the GA-68 DOTATATE PET/CT trial at the NIH – she doesn’t easily qualify for clinical trials because in addition to having carcinoid, she also has heart disease, diabetes, and has had endometrial cancer.  She has been living with a NET diagnosis since 2006, having had surgery to remove her primary mid-gut tumor 7 years ago.

Although her pancreastatin and chromogranin A markers are on the rise, recent scans have shown 6 tumors in her liver.  “Why,” asks Suzi, “does nothing else show on the scans when the numbers are going up?” The GA-68 scan confirmed what other scans have shown, only the 6 tumors in the liver.  And this is critical information for Suzi and her medical team as she goes forward with treatment options.

Being at the NIH was also an eye-opening experience – “our tax-dollars at work.” First and foremost, Suzi recommends studying the map each trial participant is given.  The buildings are large and can be confusing to a newcomer.  As the Gallium-68 radiopharmaceutical has a short half-life it is imperative to arrive for the test on time! Suzi pointed out the extreme security procedures of entering a government facility –  when driving, a person’s car and luggage will be screened.

She also noted “if you choose to stay in the hospital, only the participant can stay there. Your friend/relative will have to stay elsewhere. But you are not under obligation to stay there; you both can stay off-campus. It’s best to stay close due to the heavy volume of traffic. If you’ve got a GPS, use it. There are scads of construction spots in the area.”

Suzi advises trial participants to send copies (and she stresses copies, not originals) of everything in one’s health history to the NIH before the trial, including illnesses, surgeries (NET and non-NET, even dental surgeries), other NET treatments, and family history.  “Let them know if you have a port, an artificial heart valve, or reconstruction anywhere in your body,” she says.

The state-of-the art PET/CT scanner, the willingness of the medical staff to spend time with each patient and answer all questions, a special center that uses an ultrasound wand to locate veins for patients who have a hard time with the placement of IVs, attention to the multilingual needs of patients, and the quality of the food at the NIH all were all part of a very positive experience for Suzi.

For Lori Wolfe of Syracuse, New York, having the Gallium 68 scan is an opportunity to identify the site of her primary NET tumor which has not yet been found.  Twenty years of extreme chronic diarrhea led Lori from doctor to doctor in search of answers about her health issues.   She was tested for everything except carcinoid and diagnosed with irritable bowel syndrome.  At age 50 she was told by a new gastroenterologist that she needed a colonoscopy and this doctor began to suspect carcinoid following additional blood work.  Lori was started on Sandostatin LAR which has controlled her diarrhea sometimes but not always.  Through the Western NY Carcinoid Support Group, Lori learned about the NIH clinical trial with the Gallium-68 scan.

“It was a trial getting into the trial,” says Lori.  The records that she so carefully collected and sent were lost by FedEx.  She was especially concerned about losing a spot in the trial due to the lost records. UPS proved to be the better provider for Lori!  And a week before Christmas she got the long-hoped for call. Upon being told she qualified for the NIH trial and was accepted, Lori screamed into the phone, “This is the best Christmas present I could get!”

Lori has lots of practical advice for anyone who will be participating in the NIH clinical trial.  She and her husband drove to Maryland and stayed in a hotel about ten minutes from the NIH.  “Be sure to leave extra time when traveling to the NIH during rush hour,” suggests Lori.   And be prepared when driving to have both your car and any luggage in the car go through the government security screening.  This process can take half an hour or more depending upon the time of day.

For the scans, Lori advises participants to wear a comfy pair of sweatpants; pants with a zipper or other metal cannot be worn.  Her guidance for women is to wear a sports bra as bras with metal clasps are also a no-no.  And you might wish to leave jewelry at home as this cannot be worn during a scan.

For the 5HIAA urine test, Lori found that she needed both ice and something to put the ice in.  She recommends bringing your own cooler bag (big enough for the jug!) and plastic baggies that can be filled with ice to keep the jug cool.

If participating as an outpatient, reimbursement for travel, hotels, etc. can either be sent to participants by check (but will take 2 months or more to arrive) or you can receive reimbursement at the end of your stay but this may possibly require additional hours waiting if you are done early in the day or midday.

Still awaiting the results of the Gallium-68 scan, Lori’s other test results have been inconclusive although an earlier MRI had shown a spot on the pancreas. Lori feels she has gained enormous benefits by being part of the trial, not only is she receiving cutting-edge scans at no cost she believes her participation in the trial will benefit other patients in the future from the knowledge gained by physicians and researchers conducting the trial.

If You Participate in the Trial: Some Tips and Things to Know