Come and laugh with Steve Mazan, stand-up comedian, inspirational speaker, and 13-year NET cancer survivor. “CS Happens” is a Laugh and Learn special evening for the NET community, and is complementary courtesy of Lexicon Pharmaceuticals. This unique experience will take place in West Hollywood, California on Friday, June 8 from 7 to 9 pm.

Steve has also appeared on The Late Late Show with Craig Ferguson, The Bob & Tom Radio Show, Sirius/XM Radio and more. He has given two TED talks detailing his experiences battling cancer to chase his dreams, entitled “It’s Never Too Late to Chase Your Dreams” and “The Power of Laughter.” Steve won an Emmy award for his writing on The Ellen DeGeneres Show. Of all the performances Steve has done, he is most proud of his eight trips to Iraq and Afghanistan to perform for our troops. Thirteen years after his diagnosis, Steve likes to think that he’s been too busy chasing all of his dreams for cancer to catch up with him.

“Laugh and Learn” is open to NET community members and your guest. Further details will be provided upon registration. Seating is limited; click here to RSVP today. 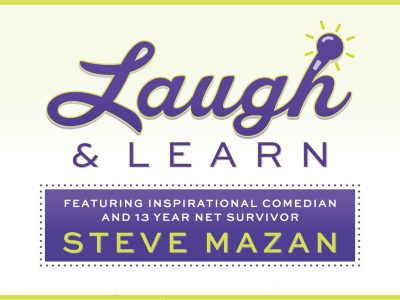